From now on i will be using my new blog site for all future postings. This is the address... http://daviddelia808.wix.com/sweetanimosity#!farewell-festivities/crc
Posted by Unknown at 15:30 No comments:

Under a tree heavy in snow waits the Easter bunny, wearing a cotton formal suit under his rabbits mask. He is smoking a cigarette as he watches a car quietly idling in the distance.

The bunny looks upwards at the falling snow. ‘Fucking hate snow’ he thinks to himself as he inhales on his cigarette and returns his gaze to the car.

Two silhouettes soon leave and disappear into the darkness. The Easter bunny discards his cigarette on the ground before walking over to the back of the car. He removes a small remotely detonated explosive from his satchel and attaches it to the vehicles wheel arch.

He returns to the tree and lights up a fresh cigarette as he waits until the pair return. They soon arrive and drive away.

The Easter bunny removes a cell phone from his satchel.

“I’ve got you now cunts” the bunny whispers “Paybacks a bitch”.
Posted by Unknown at 14:52 No comments:


A car sits humming quietly in the shadows beside the road. The lights are off as the snow falls all around, blanketing the streets in a sheet of white in the otherwise blackness of night.

Behind the wheel sat Santa Claus looking out in the distance as he inhaled on a cigarette. Across the road a woman walks out of a house and begins heading down the street away from the vehicle.

In the passenger side sits Jack Frost, a mystical man wearing a tarnished brown suit below the eerie snowman’s face. Whilst looking at the woman walking, he states to Santa that she is the person they have been waiting for.

Santa leans to open the door as Frost puts a hand on his shoulder.

Santa nods in acknowledgement, and they both exit. The snow is falling heavy and they soon disappear.

The car continues to hum in the darkness amongst the otherwise silence around them. Soon after, the pair returns and drives off into the night, snow hiding their tracks as they drive away.
Posted by Unknown at 14:49 No comments:

The front door of the house opened inwards, as two figures walked in from the cold. Krampus stepped in first, shortly followed by the sturdy Santa Claus. Krampus pointed ahead into the living room where the familiar sight of christmas fairy lights could be seen dancing in the stillness. They entered and looked around, milk and biscuits have been set out on the side, Krampus takes one and turns to Santa.

Santa shirks and pulls a list from his pocket, scans it and replies, "He's not on mine".

Krampus finishes his biscuit and brushes his hands against his sides, before pulling a list of his own from his pocket.

The jolly father grabs a biscuit for himself as Krampus moves silently upstairs, hidden amongst the shadows. Finishing his biscuit, he opens his red hessian sack and pulls out a small frame containing a picture of the young girls recently deceased father.

"Sorry i couldnt bring you the real thing as you wished"

Krampus returns from upstairs holding his black hessian sack over his shoulder behind him. The bag now contained the snoring young boy who had been naughty this year.

Santa looks to Krampus "All sorted?"

Krampus nods his head as he steps forward to open the door for Santa, before departing the house himself.

The door closes behind them, as the house returns to silence. The lights dance brightly in a room filled with darkness.
Posted by Unknown at 19:52 No comments:


Since Christmas is only a few days away, i decided to take my Stafford terrier friend, Diesel, on a little adventure up to Castell Coch. This is what happened, in a way.

Dhalia is having a sad day, until his  best friend, Diesel, comes over to visit. The pair embark on an adventure to reach Castell Coch, a journey that will see them having to escape the evil clutches of Wiwer and her squirrel army, the alien invasion during a meteorite shower, and a seemingly endless uphill struggle to their final destination in search for adventure. 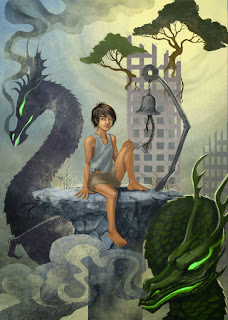 Writer Joshua Pantalleresco, (Veritas, The Watcher) interviews the School Of Bitches on the state of play after year one, and the future of Genesis. 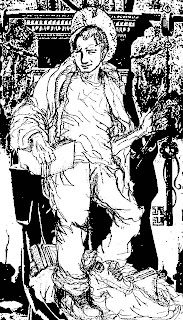 So this is the second part of my Malta Comic Con 2013 blog. To read the first part visit;